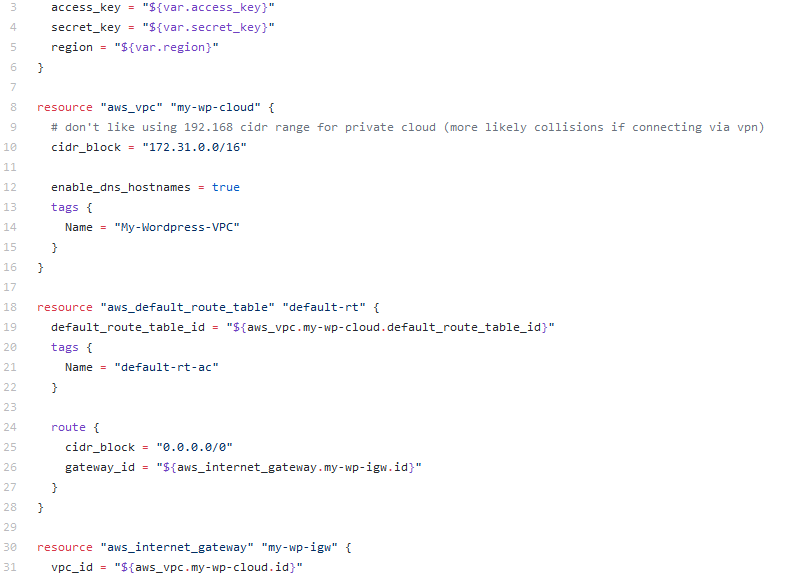 Someone complained about the lack of technical details hereso I’m going to dig into Terraform a bit.

I’ve been using a basic template for most of my VPC configurations.

Just a simple VPC with subnets in zone A and zone B for all resources.

EFS I configure with a mount in each zone as well.

I manually built the AMI I ended up using and to do that I attached this EFS volume. I then moved wordpress content I needed to be shared and setup the docker instances. Once I did this, I had all the wordpress data I needed on EFS ready to attach to any instance. I configured docker compose to utilize the wordpress image and would sync what was necessary. I later will need to backup this data off of EFS but that’s for another time.

Using an ALB to route to both docker hosts (hosts configured as described here).

I now believe I can setup routing through the ALB using host rules and additional target groups, this will allow me to get rid of HAProxy on the docker host.

The auto-scale group launches t2.small instances of the custom ami I built and utilizes a user-data file to do some minor configurations and restart servers. I don’t have any scaling policies setup yet and am just using this as a HA instance.

I’ve killed a few instances and WordPress keeps running. I initially tested with a minimum of 2 instances and experienced no down-time when one instance was killed. Since this is my personal site and I have no uptime requirements I lowered this to a minimum of 1 instance. So it’s not really HA, but close enough for me. If an instance is killed/dies I’ll get about 5 minutes of downtime which I find acceptable.

I’m going to start tweaking and experimenting more with this instance, visit my site often to stay up to date.

One thought on “Terraform for Highly Available WordPress”